Not everyone can fit a soundbar below their TV or put speakers symmetrically around their room, so Sony created the HT-A9.

So long as the speakers face you, placing them in unusual positions around the room benefits the system.

Once tuned, the system has lots of low-end thumps so you don’t miss the theatre.

The 4 speakers are large, which is wonderful because it produces immersive virtual surround sound.

The system’s only flaws are the lack of optical connectivity and the white speakers, which, like the PS5, will get dirty with use.

But that’s just me. You can enjoy surround sound without having to alter your room’s decor if you don’t have the space or symmetry for a soundbar or home theatre.

What Is Its Holistic Review?

Before Netflix and Prime Video, users would rent movies on DVD. Back then, many DVD players came with a 5.1 surround sound home theatre setup.

With the rise of streaming services, portable home theatres and soundbars gained popularity. For the optimum surround sound experience, 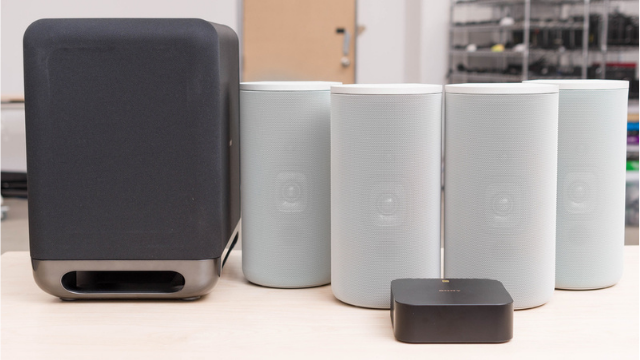 Both the home theatre in a box and the soundbar require proper speaker placement. Why not arrange the speakers asymmetrically?

Or the speakers do not have to be the same height or distance apart? What if the only important thing was to put the speakers in front of you?

That’s what the Sony HT-A9 does beautifully! Let’s go.

What’s Inside The Box?

The four cylindrical speakers come with a power wire apiece.

A control box connects wirelessly to the TV and the speakers. You also receive a remote. While the evaluation sample did not include an HDMI cable, the retail unit does.

It comes with a subwoofer and a power wire.

What About SONY HT-A9 COMMUNICATIONS

The Sony HT-A9 contains one HDMI port for eARC and one HDMI pass-through port that supports HDMI 2.1.

The two HDMI ports are joined by an Ethernet, S-Centre out, and a USB port for updates. However, this home theatre setup is designed for a different audience than the Sony HT-A7000.

We’ll get to that in a minute. 360 Reality Audio, DTS-X, and Dolby Atmos are all supported.

The Sony HT-A9 is compatible with the SW3 and SW5 subwoofers, but we used the SW5 for the review. It also supports Amazon Alexa and Chromecast.

What About SONY HT-A9 SETUP?

The Sony HT-A9 setup is unusual. You don’t need a soundbar space under your TV.

The only thing underneath your TV is a control box the size of two Apple TV 4K units.

They don’t have to be symmetrical or at the same height. They can be positioned anywhere in the room.

Unlike in a traditional home cinema, where speaker placement is critical, this is not the case.

Change your TV’s HDMI eARC source. The HT-A9, like the HT-A7000 and HT-Z9F, features onscreen setup and settings options, which is a plus compared to other soundbars.

Follow the on-screen directions to connect to Wi-Fi and calibrate the system.

You must perform sound calibration, especially if the speaker placement is not symmetrical since this will help the speakers detect their position as well as the room’s shape.

After installation, you can start watching your favourite material.

What About SONY HT-A9: BUILD?

When you first see the cylindrical speaker, the word “huge” comes to mind. Each speaker is as tall and wide as an Xbox Series X.

It is shorter than the PS5. They are solid and heavy. While the speakers are cylindrical, the rear is flat, allowing them to fit flush against the wall.

Each speaker is off-white, with a grill covering the front driver and top driver. The speakers aren’t inexpensive and will certainly draw notice. 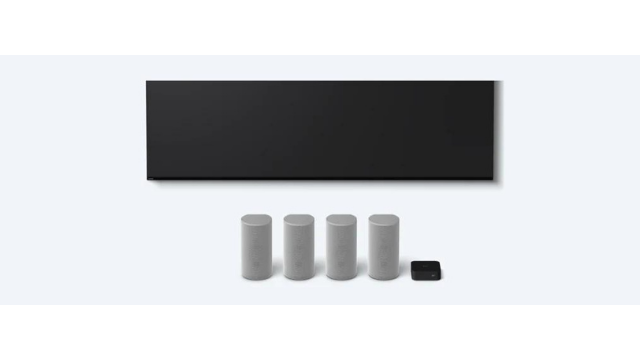 In truth, the sweet spot is wherever the speaker is placed and adjusted to the seating position. After calibration, the Sony HT-A9 creates 12 phantom speakers for surround sound.

If you have a compatible Sony BRAVIA TV, you can use it as the setup’s centre channel. Yes, there is no special dialogue channel, therefore we wanted to check how dialogues worked in this scenario.

The setup worked flawlessly with an LG B9 OLED TV. During the test, we used the TV’s built-in OTT apps and playing games on a PS5 and Xbox Series X.

What About SONY HT-A9 FILM?

We tested 5.1 and Dolby Atmos video on the TV and the results are great. The front two speakers were easily located underneath the TV, so I moved them to test the sound quality.

Same for surrounds. Place the surround speaker 6 feet away from you, facing you.

Because these speakers create phantom speakers everywhere around the room, they need room to project sound.

When the cars fly off the ramp in Ready Player One, the sound moves up in the room, adding to the Dolby Atmos impact.

Same for The Dark Knight Rises with Batman on his motorcycle. The surrounding effects are amazing.

As I indicated above, the surround speakers made the sound travel fluidly between the surround and front speakers rather than seeming like it leapt from one speaker to the next at 6 feet away.

We didn’t miss the centre channel even in action situations with lots of talking. In a standard 2.1 arrangement, the sound doesn’t come from the centre, which can detract from the experience. 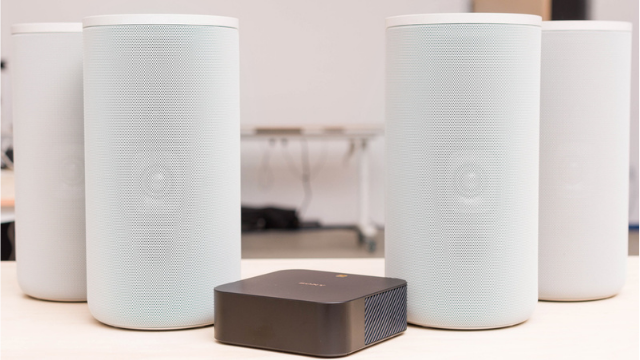 Soundbars like the Yamaha YAS 209 and the Sony HT-A9 are excellent at projecting a virtual centre channel.

However, when a conversation might have benefited from a dedicated centre channel, it felt as though the dialogue was coming from just underneath the TV.

My front speakers were 4 feet apart for most of the testing, but the effect was equally pronounced and even better at 6-7 feet.

Not to mention the Sw5 subwoofer for extra bass. A 5.1 content like Ford vs Ferrari on Disney+ Hotstar had amazing surround effects and grunts.

What About HT-A9 MUSIC?

While I couldn’t get my hands on any music mastered in 360 reality audio, there is a demo on the system that you may experience to get a flavour of it.

The home theatre has a strong bass, rich vocals, and excellent channel separation

What About HT-A9 GAMING?

We used the Sony HT-A9 for gaming. From Horizon Forbidden West to Ghost of Tsushima, with Dirt 5.

Surround effects are when the speakers truly shine.

That being said, in a game like Dirt 5, the car’s bottom end and grunt are very strong, as is the positional sound of someone passing you from the left or right.

When an enemy fires an arrow at you in Ghost of Tsushima, he announces it offscreen, and the direction it is coming from is also quite evident.

The arrow swish around you is immersive. Even in Horizon Forbidden West, when assaulted from behind by a machine, the surround speakers contribute to the experience.

The Sony HT-A9 is nearly identical to the A7000, with only two buttons relocated and the rest identical in design, size, and placement. 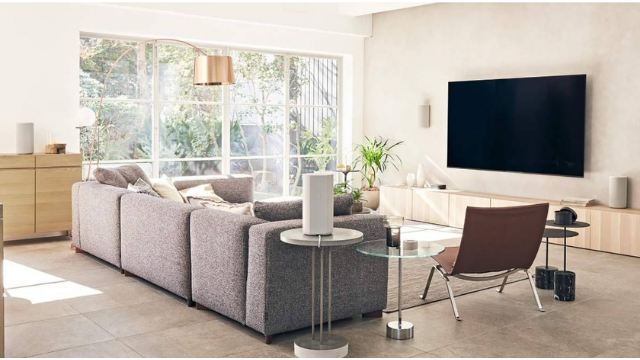 You may also control the Immersive AE, volume, surround, subwoofer levels, and playback. The remote control is effective and intuitive.

What Is The Final VERDICT?

Not everyone can fit a soundbar below their TV or put speakers symmetrically around their room, so Sony created the HT-A9.

So long as the speakers face you, placing them in unusual positions around the room benefits the system.

Once calibrated, it gives a truly immersive experience with plenty of low-end grunts to keep you entertained.

The 4 speakers are large, which is wonderful because it produces immersive virtual surround sound. – Minimal control box.

The overall sound output is superb, with minimal distortion at high volumes and crystal clear sound.

The system’s only flaws are the lack of optical connectivity and the white speakers, which, like the PS5, will get dirty with use. But that’s just me. You can enjoy surround sound without having to alter your room’s decor if you don’t have the space or symmetry for a soundbar or home theatre.