Scorn: Scorn is an evocative first-person horror adventure game set in a nightmare environment of strange shapes and bleak tapestries.

It’s based on the concept of “being flung out into the world.” Isolated and lost within this dream-like realm, you will travel via many interrelated zones in a non-linear manner. The unnerving setting is a character in and of itself.

Every place has its own theme (story), riddles, and personalities, all of which contribute to the overall cohesiveness of the universe. Throughout the game, you’ll explore new locations, pick up new skills, weapons, and equipment, and try to make sense of the sights you’re presented with. 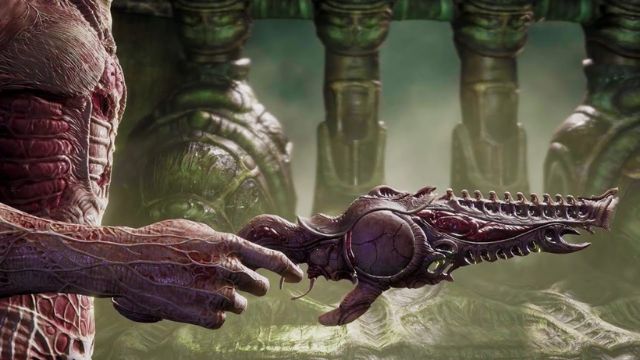 Aside from the living, breathing universe into which our unnamed protagonist is plunged, little is known about Scorn’s major plot. What we do know is that our protagonist is trapped in a dream-like realm and must travel non-linearly across several interconnected (and frightening) zones.

Scorn appears to be more lore-driven, with the primary goal of the game being to get out of the nightmare. For the time being, this is merely speculation, but the developers have claimed that each area players visit in the “open-ended” universe will have its own theme and tale, complete with riddles and important characters.

Scorn’s areas will likewise be designed up like a maze, with many rooms and paths to explore.

“All the storytelling happens in-game, with no cut-scenes to distract you from the horrific realism of the living, breathing world you’re in,” Ebb Software said of the story’s progression. But keep your eyes peeled – the game will not be sympathetic if you miss something crucial on your perilous journey. Everything has a cause and function; all you have to do is figure out what it is.”

We also know that riddles are an important element of the plot and that the maze-like structures throughout the player’s scary surroundings create their own story, thanks to a recent developer update in March. Furthermore, the developers stated that while the game may be classified as a walking simulator-based just on the environment, it is much more due to the monsters and puzzles that players will encounter. 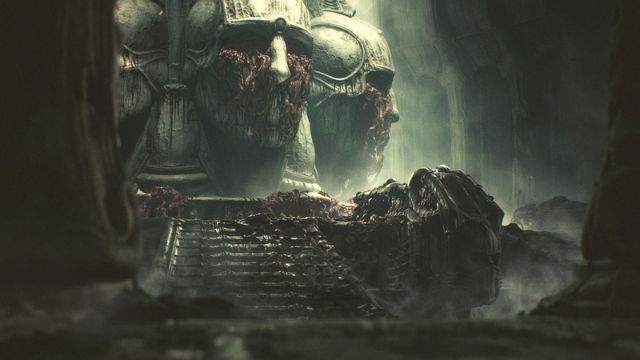 The player takes control of a skinless humanoid who is lost on a hypothetical alien planet inhabited by strange creatures and live techno-organic structures made of steel, flesh, and bone. In a non-linear approach, the player will explore many interconnected places in pursuit of answers that will reveal more about the game’s environment.

Various biomechanical weapons are presented in the game, all of which attach to a modular base implanted in the character’s body; in order to use a specific weapon, the player must first remove the current weapon from the base and replace it with another.

The most prominent weapons are a handgun and a three-barrel rifle that fires biological spikes in various shapes. The pistol is the player’s first weapon, a 6-shot weapon that deals minor damage to the game’s opponents. It looks to be entirely organic, starting with the weapon’s mouth-like base, which can be opened to allow the pistol to be withdrawn and replaced with the shotgun.

The shotgun is a three-shot weapon that does a lot of damage close up but not so much at distant distances. The shotgun appears to be comprised of organic substance and is constructed of the same components as the pistol. Other weapons revealed in later trailers include a close-range piston that does not require ammunition and can also be used to open and close specific gates, as well as an “imploding” grenade launcher.

Features of The Gameplay There are no cutscenes to take your attention away from the gruesome truth of the living, breathing environment you’re in. But keep your eyes peeled; the game will not be sympathetic if you miss something crucial on your perilous journey. Everything has a meaning and function; all you have to do is figure out what it is.

Full body awareness — By being aware of the character’s body and movement, players will feel more immersed in the game. The world is realistically interacted with: objects are picked up with your hands (rather than floating in midair), machinery and instruments are handled by gripping the controllers, and so on.

Inventory and ammunition management are defined and restricted. It is important for the player to maintain a higher level of alertness during the game. Players must consider when to fight and when to hide, as well as how their actions impact the world around them. To progress, different play styles will be required.

Scorn is an upcoming first-person biopunk survival horror adventure video game for Microsoft Windows and Xbox Series X/S developed by Serbian company Ebb Software. The game is based on the works of H. R. Giger and Zdzisaw Beksiski, two graphic painters. Scorn will be planned to release in October 2022.

Scorn will be accessible on Xbox Game Pass from the start, and subscribers will be able to play it for as cheap as $9.99/£7.99 on Xbox One, Xbox One S, and PC. Xbox has been releasing highly anticipated titles like Halo Infinite and Back 4 Blood for free on its membership program, and Scorn is thankfully getting the same treatment.

We haven’t seen an official price yet, but Scorn is expected to be $60. Scorn will not be coming to PS5 or Nintendo anytime soon, if at all. Ebb Software has teamed up with Microsoft to offer the spooky horror adventure solely on Xbox platforms.

“Before opting to cooperate with Microsoft, we made sure that they would have no influence over the game’s concept and development process,” the developers wrote in their Kickstarter campaign. They were quite helpful in this aspect.

The only thing they cared about was exclusive rights. When all of that was agreed upon, it was a no-brainer option when you consider all of the benefits Scorn will receive from this alliance, from greater resources to significantly increased marketing exposure.”