Samsung Galaxy Tab S8+: Since… well, ever, it’s been difficult to get enthused about Android tablets. I’ll admit that I was a little enthusiastic when the Nexus 7 first came out, but things soon went sour after that.

I’m not sure if you should be enthusiastic about the Galaxy Tab S8+, but Android tablets may finally be worth getting excited about in the near future. The hardware is fantastic, with the most beautiful OLED panel I’ve ever seen and the greatest iteration of Samsung’s S Pen yet.

Although the software experience has improved and will continue to improve when Android 12L is released later this year, there are still too many flaws with Android on tablets to highly suggest the Tab S8+. If you can get beyond a few minor hiccups, using Android on the Tab S8+ may be a pleasurable experience. 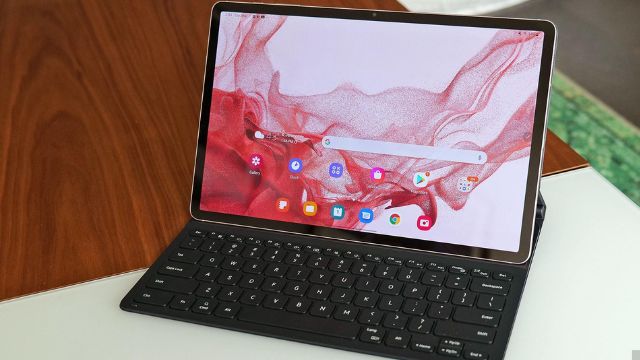 The Tab S8+ will feel similar if you’ve used a Tab S7 FE. It’s a screen-on-one-side ultra-slim aluminum platter. In fact, the Tab S8+ is almost entirely made up of a screen, which I prefer. The bezels are tiny and symmetrical all around (no notch), allowing you to easily handle the tablet without touching the screen.

The 12.4-inch OLED has a resolution of 1752 x 2800 pixels and a refresh rate of 120Hz. Although it doesn’t reach the towering heights of Samsung’s phones, the maximum brightness is more than adequate for use in most lighting settings. It’s brighter than most laptop screens of comparable size.

An optical fingerprint sensor, identical to the one seen in Samsung’s FE and A-series phones, is included. It’s on the right side of the screen (landscape), and it unlocks the phone as reliably as any current optical sensor (but slightly slower than Samsung’s ultrasonic sensors). I can’t really complain, but for $900, an ultrasonic sensor like the S22 family’s would have been good.

Samsung‘s last square ratio tablets, which were similar in design to the iPad, are already many generations old. It’s back to widescreen OLEDs on its tablets now, with a 16:10 aspect ratio in this case.

Because of this, the 12.4-inch tablet is awkward to operate in portrait mode, but the total package is light enough that you can get by—not it’s as heavy as competing tablets, such as the largest iPad, which weighs 80 grams more. It’s actually quite good at reading big documents, and the S Pen is ideal for making notes or doodling on them. 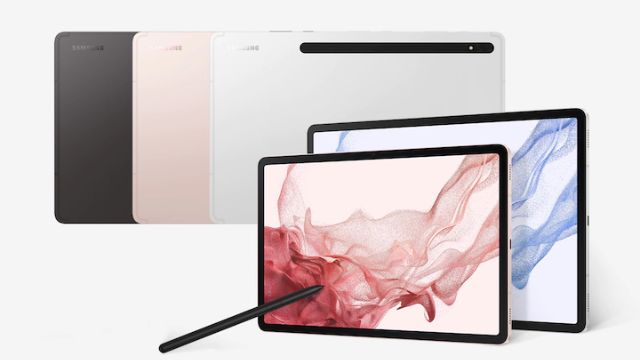 The left and right corners each contain two speakers, which sound significantly better than a typical laptop. They are, however, simple to block while holding the tablet. On the rear, there are two camera sensors (part of the plus upgrade), and a glass insert for the S Pen is located next to the sensor island.

Samsung provides the stylus with the tablet, and it supports all of the S Pen’s features over Bluetooth. When the pen is docked to the back of the tablet, which it sticks to magnetically, it charges. When the pen is attached, it stays put, however finding the alignment blind might be difficult.

While the magnets can hold it, they aren’t powerful enough to align it for you unless you can get near to the spot on your own. Physically, the S Pen is identical to the previous model. It’s around the size of a regular pen, which makes it more pleasant to carry for extended periods of time than the S22 Ultra’s small version.

Samsung claims that the latency has been reduced to 6.2 milliseconds, which is greater than the S22, but I can’t tell the difference when comparing them side by side, and the S Pen is still far ahead of any other Android tablet’s stylus I’ve used.

Samsung is no longer offering the free cover, and there are no extras in the box to compensate. The tablet, as well as the S Pen and a cable, are included. There isn’t a plug for the tablet. I still don’t like the concept of a $900 tablet arriving without a charger, but it’s a little less vexing here because I’m guessing most people who buy this tablet also have a newer Android phone with a USB-C charger.

Despite its substantial size, this slate lacks a headphone jack. That shouldn’t amaze anyone anymore, but I can’t help but think Samsung could have added a tiny 3.5mm jack on this device. On the other end, there is a microSD card slot, which is a good feature in this day and age.

Only a USB-C port on the right edge serves as a connection (in landscape). The tablet’s firm, tactile buttons are located on the top, so they’re easy to reach if you choose to use it in portrait mode.

Given the price, the haptic motor doesn’t feel as precise or powerful as I’d expect. In fact, my first review item had a faulty motor that made a lot of buzzing noises and provided very little vibration. The replacement has been satisfactory, but the feedback has been average. 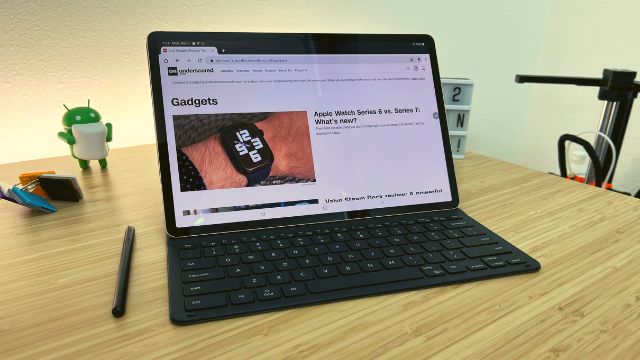 The tablet’s bottom edge contains pogo pins for connecting to Samsung’s keyboard case, which was included with pre-orders. Given the size and the wonderful screen (which I’d hate to harm), I believe you’ll need a Galaxy Tab S8+ case of some sort.

You shouldn’t spend $170 on a keyboard case if you didn’t acquire it for free. It provides adequate protection for the tablet and has a pleasant aesthetic, however, the keyboard is of poor quality. As you’d imagine, the keys don’t have much travel, but they’re also rattly and mushy. There’s no trackpad as you get with the Tab S8 Ultra’s keyboard cover, so typing isn’t ideal.

Why spend $900 on this tablet when you can have all of it for less money with the cheaper Samsung Galaxy Tab S8? It’s all about the monitor. The colors are vibrant, the visuals are razor-sharp, and the brightness allows it to be used both indoors and outdoors.

With a 12.4-inch OLED panel, you can even use the Tab S8+ in bed at night without becoming blinded. The improvement from the Tab S8 with LCD is well worth it. But what about objectively? A high-end Android tablet isn’t something most people want or need right now.

Hold off on purchasing the Tab S8+ now that Samsung’s pre-order sale is ended. It’s the best high-end Android tablet option, but it’s $900, and the official cases (which you’ll probably want) are expensive. Unless you’re all-in on Android tablets, wait for a bargain.