Razer Blade 15: The Razer Blade 15 has long dominated the high-end laptop market, frequently ranking as one of the best gaming laptops available.

With some absolutely eye-watering features packed into a sleek, elegant chassis and a great display on top, the 2022 update cements its position for another year. Of course, at $3,999, the top-of-the-line RTX 3080 Ti combination we got our hands on will outperform the majority of the market, but if you’re wanting to hit 4K60+ and have the cash to spare, look no further.

They’re not cheap, but with pricing starting at $2,499.99 for an RTX 3060 / i7-12800H model, there’s plenty to choose from for those looking for luxury. To truly put this latest iteration to the test, we ran the 4K 144Hz i9-12900H configuration for three weeks. Our opinion is that this is the best Razer laptop on the market for those who have the cash to spend.

The 2022 Blade 15 edged out the Aorus by a single frame at 1080p (essentially a tie), while it beat the previous Blade 15 Advanced by 6 fps at 1080p and 5 fps at 1440p when we ran Grand Theft Auto V’s test at very high settings. The Zephyrus was once again considerably behind, with frame rates ranging from 71 to 41 fps depending on the resolution.

The Blade 15 doesn’t look all that different from the Blade 15 Advanced from last year, but that’s alright because Razer’s black aluminum chassis has long been regarded as one of the best in the gaming laptop game–especially if you prefer modest designs. The green three-headed Razer snake emblem, as usual, contrasts a lot with the otherwise sleek design.

If you’re unfamiliar with Razer laptops, they have strong aluminum casings and rounded corners, similar to Apple’s MacBooks. The shells are black, of course, because they are Razer gaming laptops. Similar silver laptops are available under the Razer Book brand, although these are 13-inch devices with integrated graphics. With Razer’s laptops, you do get an RGB-lit keyboard, which adds a touch of customized gaming edginess. 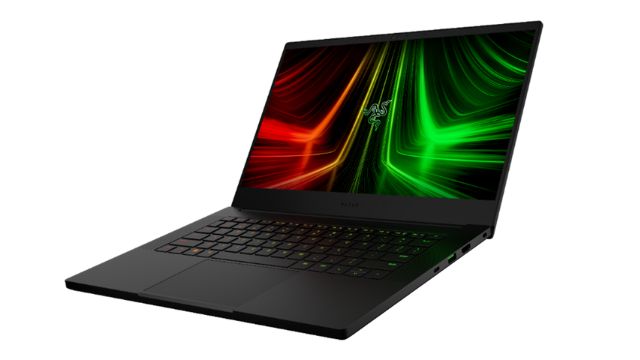 The bottom of the Blade 15 is one component of the design that isn’t particularly apple-like. This time around, Razer has altered the base and hinge to allow for greater cooling, which essentially entails removing metal from the chassis. However, neither the weight nor the proportions of the laptop have altered.

The 15.6-inch display’s bezels are still small on three sides, and Razer has stuck with a 16:9 aspect ratio once again. That’s understandable given how tough it is to find high-resolution, gaming-focused 16:10 or 3:2 panels. Those that create content as well as play games, however, may opt for a larger screen.

The power button has been relocated from its previous location within the right speaker grille to within the keyboard panel itself, in the upper-right corner, where the delete button usually resides (pushing that button one key to the left). I didn’t find this to be a huge issue, owing to the fact that I’ve had an Asus laptop with the power button in that location for years. However, for some, it may be an irritation that requires some adjustment.

Because you’re paying for an RTX 3080 Ti computer, you may expect excellent performance. This machine flies thanks to all of the cooling engineering under the hood.

When I turned everything up in the Razer Synapse software (pushing both the CPU and GPU to their limits), I was consistently hitting 4K60 in games like Shadow of the Tomb Raider, and just missing it in medium settings with some particle effects and textures dropped on heavier games like Metro Exodus. However, even with those settings cranked up to 11 on these more demanding activities, we were still a long way from the dream.

In 4K resolution, Red Dead Redemption 2 managed 27 frames per second in Ultra mode, while Metro Exodus clocked in at 26 frames per second. Lighter games looked fantastic, but it just required a little tweaking to get Doom Eternal and Halo Infinite up to speed.

When you turn those dials up, the fans can undoubtedly make a racket, but I’ve seen considerably louder machines doing far less work. Even if you don’t want to plug into one of the finest gaming headphones to block out the whirrs, the balanced preset gave me some good results. Total War: Three Kingdoms runs at 1080p at 79 frames per second in Ultra, and Red Dead Redemption 2 runs at 67 frames per second in 1440p.

In 2022, the Razer Blade 15 is still leading the way in high-end components and luxurious performance, just like its predecessors. All of this comes at a price that will scare away mid-range buyers but feels reasonable to anyone looking to invest in the best of the best.

If you’re just wanting to play a few rounds of Fortnite or relax with some city builders, the Blade 15‘s pricing is hard to swallow, but with competing machines in this price range delivering identical internal characteristics, the Blade 15 does a lot to make your money work harder for you.

Even in this high-end market, the 4K 144Hz panel is an anomaly, and the overall build quality and design are unquestionable. Overall, I wouldn’t recommend this bank-busting gear to the great majority of players, but those looking for the laptop to rule them all will find plenty of value here.

If you can’t quite stretch to the $3,000-$4,000 price range, the Razer Blade 14 offers a similar style at a slightly lower price. Alternatively, people looking for a similar luxurious build with less expensive components can consider the Asus Zephyrus G15.