The Pac-Man Museum + includes 14 games from the Pac-Man franchise, ranging from arcade games to home console and handheld versions. Each game is presented as it was initially exhibited, with missions added to the original games.

The game includes a configurable arcade mode in which the user can control Pac-Man and navigate through a virtual arcade. Decorative things can be purchased using coins earned by playing games and performing objectives and can be used to design the arcade. Arcade games are also played using coins. 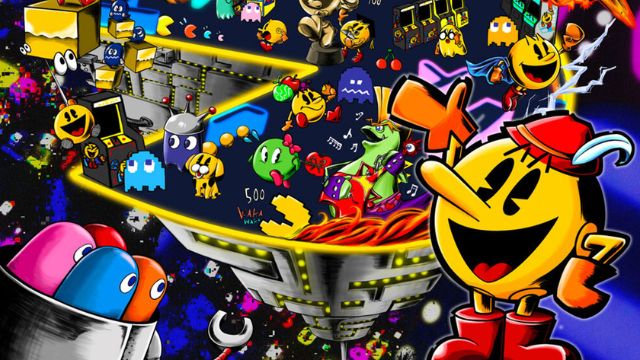 PAC-MAN MUSEUM+ is a one-of-a-kind curated collection of classic and new PAC-MAN games from the renowned iconic videogame character’s library’s over 40-year history. PAC-MAN BATTLE ROYALE, PAC-MAN 256, and more modern furious titles will be available for fans and aficionados to play alongside the legendary original arcade classic.

Among the featured games in PAC-MAN MUSEUM+ are:

The game’s trailer claims that “coins” are required to play the game; however, it’s unclear how this concept works; coins can be gained by completing various “missions.” The console games appear to be marked as “Free Games,” implying that they can be played endlessly. Because the compilation is still in the works, it’s unclear if this is the whole list of titles that will be included, or if more are in the works.

The Pac-Man, Pac-Land, and Pac-Mania cabinets are all based on their Bally Midway and Atari equivalents; the other games, on the other hand, have new or revised machine designs. This is the first official Pac-Man collection to incorporate artwork from the Bally Midway/Atari era. 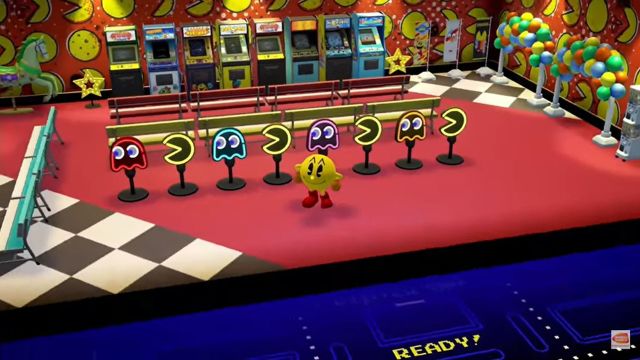 The Super Pac-Man cabinet and in-game artwork are based on the Bally Midway machine, however, Pac-Man and the ghosts’ artwork is re-used from modern promotional artwork (with the exception of Pac-Man, which uses artwork from the original Japanese release).

Surprisingly, the Pac & Pal cabinet appears to be based on a unique, unauthorized machine constructed in 2013 for a Funspot arcade tournament.

Other components appear to be based on a Pacific Arcades fan-made Pac-Man & Chomp-Chomp artwork kit (albeit with Miru in place of Chomp-Chomp).

All of the cabinets appear to be based on the same model, which is sometimes erroneous in comparison to the machines’ original designs.

Pac-In-Time, Pac ‘n Roll Remix, and Pac-Motos have all been re-released for the first time on this compilation.
This is the first time that the two Pac-Man Arrangement games (from Namco Classic Collection Vol. 2 and Namco Museum Battle Collection) have been combined into one package. It’s also the first time the games have been labeled to distinguish between the two versions.

There are 18 sprites on the Japanese Pac-Man Museum + website. However, some of them were not featured in the trailers.

The “Pac-Mom” character (shown as a collectible figure) appears to have made her debut in Museum +, despite not being a straight match for any other Pac-Man character. It’s conceivable she’s meant to be a rival to Ms. Pac-Man, yet her appearance and name suggest she’s Pac-Wife Masters from the original Pac ‘n Roll game. 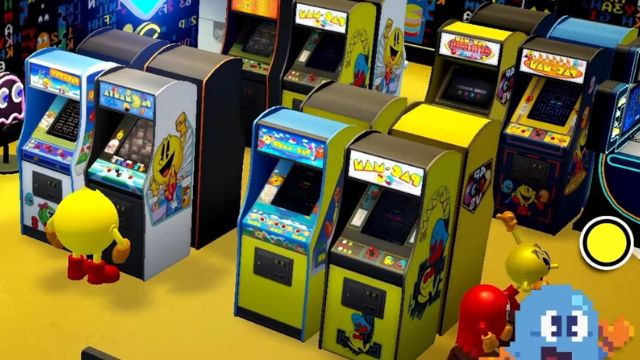 The lack of multiplayer is thought to be connected to continuing copyright concerns with Ms. Pac-Man, who was featured in the game and is currently at odds with GCC and AtGames.

When the game was playable at Comic-Con, Blinky, Pinky, Inky, and Clyde strolled the arcade as NPCs, and Blinky alone wandered the arcade on Famitsu’s stream. It’s unclear what they’re used for.

A 3D arcade area has replaced the Ghostly Adventures-themed “Pac Room” at the original Pac-Man Museum. The player controls Pac-Man in the arcade and can configure it to their taste. This involves putting the arcade machines wherever the user wants them, as well as adding numerous other trinkets and display elements (purchasable via coins).

Cabinets are where the games in the collection are played. Except for the free game cabinet, other cabinets require coins to play. Missions can be completed to unlock cabinets. All cabinets come in a variety of colors.

Pac-Man Museum Plus is a sequel to Pac-Man Museum, a 2014 compilation release that featured games from the Pac-Man franchise. Now Production is putting together the collection, which will be released in May 2022 by Bandai Namco Entertainment.

Bandai Namco Entertainment first announced Pac-Man Museum Plus on social media on November 19, 2021, with a release date of early 2022. Famitsu announced a live stream on February 25, 2022, showcasing the first “hands-on” video of Pac-Man Museum Plus, which was a webcast on March 4, 2022.

Through social media announcements on February 28, 2022, the game was assigned a May 27, 2022 release date, along with the game being planned to be included on Xbox Game Pass the day it opens.