With the Mushroom Kingdom gang, tackle, pass, and score in battle soccer. Mario Strikers is a new game from Mario. Battle League is a 5-on-5 soccer-like game with no rules—do whatever you have to in order to win! Get down to business and try to score as many goals as possible by fighting foes, using objects, and landing score-boosting special shots.

Peach, Toad, and Yoshi, all staples of the Super Mario franchise, put their cleats (and stats) on the pitch and will stop at nothing to score. Customize your characters with equipment that boosts their stats and improves their appearance. Play online* or pass the ball to nearby players**—just watch out for the electrified fence.

Join an online club to help you rise through the ranks.

Team up with up to 20 strikers online* and battle for points against other clubs. Find the ideal club for you, form a team with your pals, and bring your own unique striker style to the table. Each season, strive to be the best club in the world!

Up to 8 players can pummel the pitch

On a single Nintendo Switch device, up to 8 people can compete for the goal through local wireless** or online*. In online battles, bring along a second striker on the same system. Individual bouts can be played locally with four players from each team going cleat-to-cleat. 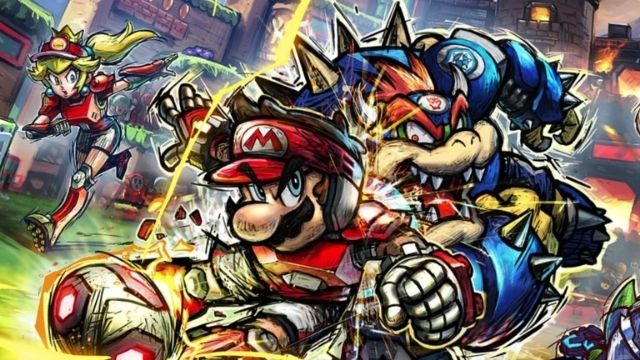 The game maintains the sport’s primary idea, in which players move around a field in an attempt to pass and shoot a ball into a goal to score points, with the team with the most points at the end of the game-winning.  The game, on the other hand, takes a lot of liberties with the sport.

Aggressive tackles and attacks are permitted, however, they provide the opposing player with “items” to employ. Items frequently work in the same way that they do in Mario Kart or Mario Tennis: banana peels can be placed on the field to cause characters to skid, and shells can be fired at characters to knock them over temporarily.

Instead of “out of bounds,” the field is surrounded by an electric fence, which players can use to check and knock opponent figures into. Collecting a glowing orb on the pitch also allows the player to perform a “Hyper Strike” and score a 2-point goal if the move is powered up without being interrupted. 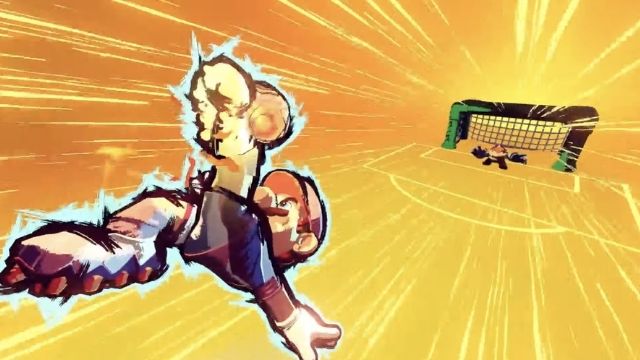 The gameplay is similar to previous Mario Strikers games, in which two teams of five players (four players and a goalkeeper) battle for points by getting the ball into the opposing team’s net. Unlike previous games, there appear to be no generic sidekicks in the game so far, with teams consisting just of key playable characters and a goaltender.

Hyper Strikes, unlike previous moves, must first be gained by collecting an Orb that emerges on the field from time to time. Furthermore, each character’s Hyper Strike has various gameplay-related qualities, making it similar to Mario Sports Mix‘s Special Shots. Hyper Strikes can also go around goalies.

Gear can be acquired using Coins from the in-game shop, allowing the user to change the stats of their characters. The player can choose whether or not to equip their character with gear while selecting characters. 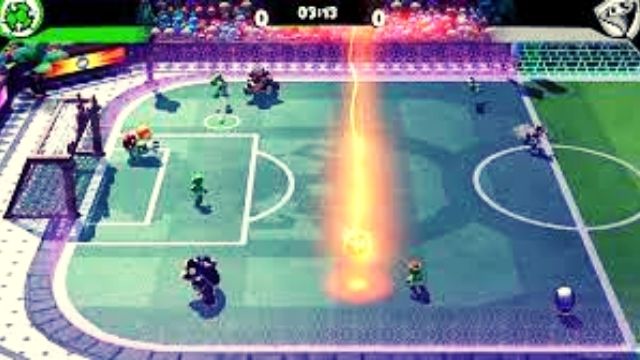 The soccer pitches are now divided into two halves, each themed after a different character, unlike previous Mario Strikers games. It’s unclear whether each field half will have its own stage gimmicks like in Mario Strikers Charged or if only visual alterations will be made like in Super Mario Strikers.

Electric fences that can shock players are present around the perimeter of the field, as they were in prior games.

Mario’s field is inspired by a classic Super Mario level. A? Block and Warp Pipes are shown on the turf. The electric fence is based on the Brick Block design. Warp Pipes are used to constructing the goal. Bowser’s field, complete with lava, is themed like his castle.

The turf has a fire on a torch motif that resembles Bowser’s cuffs. The electric fence resembles a chain-link fence. Metal is used to construct the goal, which is topped with two lit torches.

Luigi’s field is designed to look like Luigi’s Mansion. A frightening tree seen through a window is shown on the lawn. The spider webs inspired the design of the electric fence. The goal is made of wood and has some antique-style ornamentation on top.

The field of Donkey Kong is based on Donkey Kong Island. A barrel and two vines are seen on the turf. Bananas inspired the creation of the electric fence. The goal is composed of wood and logs that are tied together with rope and adorned with feathers.

Mario Strikers: Battle League is an upcoming association football/soccer video game developed by Next Level Games and published by Nintendo. On June 10, 2022, it will be released worldwide on the Nintendo Switch. Mario Strikers 3 is the third installment in the Mario Strikers series.

Everything You Need To Know About – Amazon Echo Dot -Smart Speaker