SanDisk gave one of our writers a review unit to test.

Read on to find out what they think in detail.

Smartphones are incredibly powerful handheld computers, and many of us use them to stay in touch, take pictures, find our way around, and even do our jobs.

Apple and Google both offer cloud backups of files and settings to make sure you have a copy of your important stuff.

However, as your collection of photos, videos, and other things grow over time, your monthly or annual fee will go up to cover more storage.

And even if you have your stuff stored on a server somewhere, you might want the peace of mind of another hard-copy backup that you can use in a pinch.

The iXpand Luxe Flash Drive from SanDisk can help in this situation.

With both USB-C and Lightning ports on a single, tiny drive, you can back up files from both Android and iOS and share them between both mobile platforms, as well as Windows and macOS computers.

It lets you do both manual and automatic backups, and you can use a simple app to manage the USB storage.

The iXpand Luxe is a niche accessory, but it is useful and works well.

The SanDisk iXpand Luxe is an incredibly small device. It is less than 2 inches long and about a third of an inch thick.

It doesn’t have a full-sized USB-A port, so it’s even slimmer than most flash drives.

Instead, it has both USB-C and Lightning ports on a rotating core that swivels to reveal each port separately.

The tough metal frame covers part of the port that isn’t being used, and you can cover the port that faces outward with a snap-on plastic cap when you’re not using the Luxe.

A loop on the back of the drive lets you attach it to a keychain or hang it on a hook, whichever you prefer.

SanDisk’s previous iXpand Flash Drive had both a Lightning port and a larger USB-A port, and the company has made other flash drives for either iPhone or Android.

But the swivelling design of this new Luxe model protects both ports and makes it easy to use with both iPhones and Android phones. 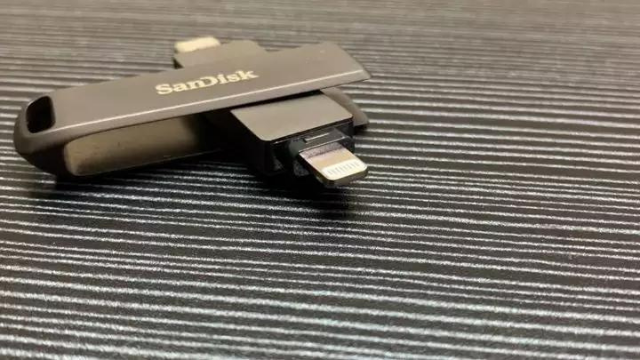 As a result, it’s a little bit more expensive than older models, but it can do more things.

The iXpand Luxe comes in capacities of 64GB, 128GB, and 256GB, and all three models are the same size.

What About Its Set Up Process!

When I plugged the SanDisk iXpand Luxe Flash Drive into my Apple iPhone 12, Pro Max, the phone asked me to download the iXpand Flash Drive app from the App Store.

That’s a good idea. The Android-based OnePlus 9 phone didn’t ask me to download an app when I plugged in the iXpand Luxe, but the similar SanDisk Memory Zone app is easy to find and download from Google’s Play Store.

What About Its Performance!

Using the iXpand Luxe drive is pretty easy on both iPhone and Android.

You’ll use the SanDisk app for each platform to do everything, including backing up photos, videos, contacts, and other files to the drive.

You can also move files from the iXpand Luxe to your phone and view media directly from the flash drive. You can also password-protect files if you want to.

There are both manual and automatic backup options, and you can even set a regular backup schedule, but you’ll need to plug in the iXpand Luxe to do the job. 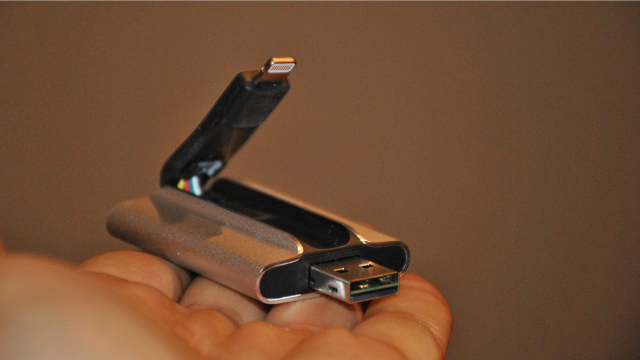 Whether or not you use Apple’s iCloud could make your decision about which route to take harder.

Because I’ve been saving my iPhone photos to iCloud for years, the iXpand Luxe saw that I had over 55,000 photos that needed to be backed up, even though they aren’t all stored on the device.

Is It Worth It?

The 64GB version of the SanDisk iXpand Luxe costs $45, but 64GB is usually considered to be a small amount of internal storage for a phone, so I don’t think it’s enough storage for a backup device you could use for years and maybe even on multiple devices.

Still, it could be well worth the money if you’re serious about backing up your smartphone files on a hard drive and want something big and strong.

A regular cloud backup will be enough protection for the average smartphone user.

Still, cloud services can get expensive as your backup footprint grows, and even if cost isn’t a big deal, you might want a second backup for important or sensitive files, even if you’re using cloud services.

In that case, the SanDisk iXpand Luxe Flash Drive is a useful option.

It’s well-made and easy to use, but storing photos and videos in iCloud can make the backup process slower or harder.

Here Is All You Need To Know About iRobot Roomba E5! Explained!

Bose SoundLink Micro Review: All You Need To Know About It!