With Instinct2 Solar, Garmin wants to push the limits of how long a battery can last and get rid of the need to charge it.

Usually, it’s a good idea to be sceptical when a company says that its smartwatch could have a battery life that lasts forever.

Since Garmin is often able to do things that other wearable companies can’t, the Solar version of this basic, tough GPS watch is an interesting case.

Of course, the battery life isn’t the only thing that makes it appealing.

Unlike some of Garmin’s more expensive GPS sports watches with more features, this one doesn’t cost too much.

The question is then whether the Instinct 2 Solar can handle daily tracking and not have to be plugged in to charge.

Our quick take: The Garmin Instinct 2 Solar gets it right when it comes to battery life, which is very important. 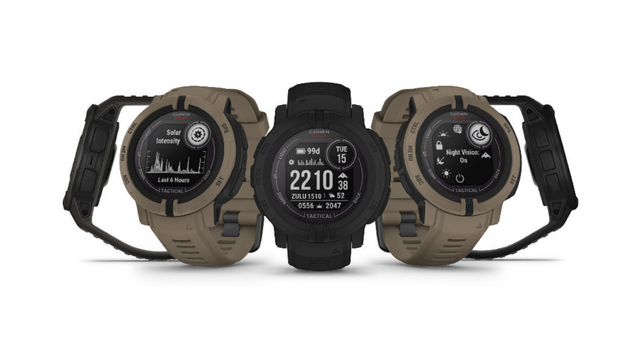 Like we’ve seen with other Garmin devices, this only gets better if you get the bigger one.

So, to answer the question in the beginning, yes, it does work.

The Instinct 2 Solar is great for people who care more about battery life than anything else.

It’s even better if you spend a lot of time outside or live somewhere witfibre-reinforced a lot of suns.

We think it will be appealing to people who want the look of a classic digital watch but also want a device that works like an activity-focused smartwatch.

With all the advanced metrics and fitness tracking features of a modern Garmin tracker, this is a very good option to consider, even if the design, small display, and lack of a touchscreen won’t be to everyone’s taste.

What About The Design!

Design: The Garmin Instinct 2 has a nice look, even if it doesn’t look like a typical smartwatch.

Instead, it looks more like an old-school digital watch.

We think it looks and feels a bit like a Casio G-Shock.

The case is made of a chunky fibre-reinforced polymer (fancy plastic) and is made to take a beating and withstand water up to 100 metres deep.

It also comes in a lot of different colours. The standard Solar unit we tested only comes in black, light grey, or blue.

However, if you choose the non-solar model, you can get it in other colours.

They come with a silicone strap that matches the colour of the watch.

But if you use the customization tool on Garmin’s website, you can mix and match a few different case colours and choose your strap style and material. 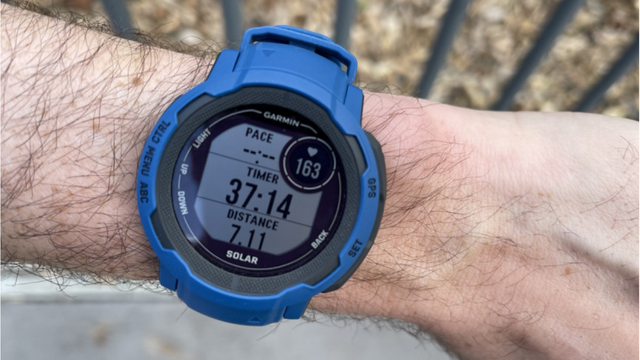 Even though it is big, the watch is not too heavy and is very comfortable to wear.

Part of that has to do with how Garmin usually makes silicone straps. It is very flexible and stretches a little, and there are up the length, so it can be changed in any way.

These buttons do the same things as the buttons on most other Garmin models with five buttons.

The top right button starts a task, and the bottom right button takes you back (or can be programmed to launch a specific function with a long press).

On the left, from top to bottom, are the button to turn on the light and the up and down buttons for scrolling through the watch’s screens and lists.

Once you know the basics, it’s easy to use, and there’s no touch screen to get in the way. Just press buttons like you used to. Whether you like that or not is, of course, a matter of taste.

When it comes to the display, it’s about as simple as it can get and still work with all of the different Garmin features.

So, it’s a small monochrome transflective MIP panel with a tiny circular window display cut into the top right corner. 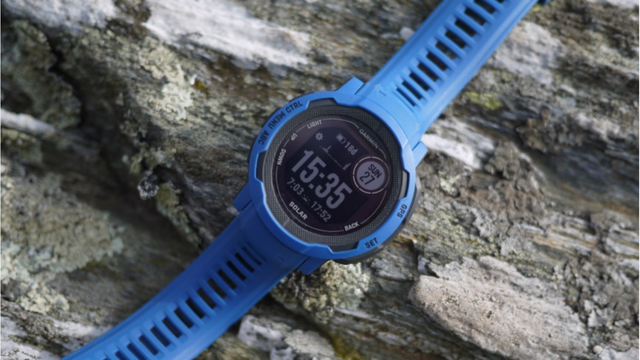 Because it is transflective and has a Memory-in-Pixel (MIP) display, it has a few important qualities.

First of all, it’s always on because it doesn’t need a frontbacklightight to be seen. In the same way that classic digital watches do, it reflects the light around them and shows black and white characters.

However, it is a bit more advanced in terms of what it can do with data and graphics.

What About Its Battery!

Since it doesn’t need a backlight, it’s very efficient with its battery, which is a big reason why this watch can go so long without being charged.

The only bad thing about this reflective screen is that it can’t be seen in the dark unless the backlight is on.

In this case, it’s a very faint blue backlight, just like the old digital watches used to have. It’s not the brightest, but you can see what’s on the screen even when there’s not much light around.