Asus ROG Zephyrus G14 (2022): The Asus ROG Zephyrus G14 for 2022 was the first system to be unveiled that will follow AMD’s Advantage design architecture in 2022, just as the original G14 model did when it launched in 2020. This means it makes use of AMD’s most up-to-date technologies.

Much of AMD’s processor upgrades this year are aimed at improving gaming laptop battery life while also boosting performance by channeling more power where and when it’s needed.

The AMD Radeon RX 6700S or RX 6800S graphics processors target the same low-power-yet-high-performance tier as the Ryzen 9 6900HS low-power/high-performance processor for tiny gaming laptops. However, the catch appears to be that it’s either great performance or low power. This isn’t simply true for graphics-intensive jobs, where I’d expect to see a compromise. 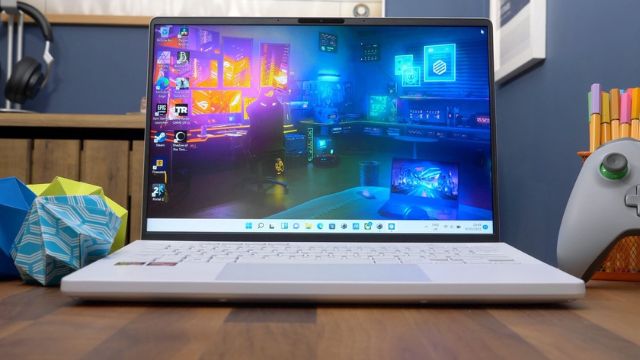 The other snag is a lack of availability. It has already fallen short of its March forecast, however, this is most likely due to current production and shipping-related supply chain bottlenecks. Even before the pandemic, though, these Asus and AMD poster-child laptops looked to suffer persistent availability concerns.

AMD has put forth a lot of effort to connect its CPU and GPU operations. So, if Asus decides to sell models with an Nvidia GPU, you won’t be able to make any predictions about its speed, battery life, or behavior on different power profiles based on the AMD versions. For example, AMD’s SmartShift can juggle the CPU and GPU’s power needs to boost the GPU’s power from 80w to 105w, but only if both processors are AMD’s.

The enhanced AniMe Matrix LED array on the cover distinguishes this model from prior generations. The overall weight is increased from 3.6 to 3.8 pounds due to this attractive but gimmicky animation element. A new 120Hz 1440p-class 500-nit panel with a complete P3 color gamut is available, while the default is a 1080p 450-nit 144Hz variant, which I tested.

There are a few more design improvements that make for a more than rote refresh: The webcam now supports Windows Hello facial recognition sign-on, but it’s still a 720p camera that falls short of expectations. The speakers were also redesigned by Asus, with upward-firing tweeters and downward-firing woofers.

Getting a fantastic gaming laptop that’s super-powerful and capable of handling the most demanding AAA games has always included purchasing a large, unwieldy machine. Despite the fact that they are becoming slimmer and lighter, there is still a trend toward larger PCs with larger displays.

But what if that’s something you don’t want? The Asus ROG Zephyrus G14 is here to help. It’s a small machine with a quick refresh screen that’s perfect for gaming, and it won’t require you to invest in a larger bag to transport it. It’s also not prohibitively pricey.

We’d suggest the Asus ROG Zephyrus G14 to just about anyone because it’s not just wonderful for gaming but also for everyday tasks.

So, if you’re looking for a little but powerful gaming laptop, the G14 is a well-balanced alternative that straddles the line between everyday champ and gaming powerhouse.

The ROG Zephyrus G14 comes in a variety of configurations, but they’re all AMD-powered, with different combinations of Ryzen 9 CPU and Radeon RX GPU. The Ryzen 6900HS processor is paired with a Radeon RX 6800S graphics card in our test system. When it comes to raw power and performance, this puts it near the top of the food chain. When you first start up Forza Horizon 5, you’ll get a sense of how powerful it is. The game recognizes your system settings and proposes a performance setting when you first start it up. With this Asus laptop, ‘Extreme’ was selected automatically. That’s for sure, it’s got some muscle under the hood.

During our testing on the G14, Forza Horizon 5 looked and felt fantastic. With the highest resolution enabled, the graphics remained crisp and sharp. We rarely noticed the frames per second drop below 55fps on continual watch, and it was frequently between 55 and 60fps. Only a few frames drop happened, usually when another program was mistakenly left running in the background.

We also played a variety of other games, including Rising of the Tomb Raider, Firewatch, and Brothers – A Tale of Two Sons, as well as some time with an old favorite: Portal 2.

The G14 scores admirably in benchmark tests. Cinebench R23 returned multi-core values that were greater than an Intel Core i9 comparable when the laptop was plugged in and set to ‘Performance Mode.’ It gave us a multi-core score of over 11,600 and a single-core score of roughly 1400 points.

The G14 routinely hit around 75fps in the built-in benchmark mode in Forza Horizon 5, with the resolution set to 1080p, and around 55fps with the resolution set to maximum for the display. The built-in benchmark mode in Rising of the Tomb Raider produced identical findings, averaging over 72 frames per second across the three sequences it ran through.

The laptop’s fans kicked in for the most part after games were up and running, although they were rarely unduly noisy. You could hear them, of course; it’s a gaming laptop, after all, but it never sounded like a helicopter taking off.

Of course, if you put it in ‘Turbo’ mode, it can boost the performance even more and give you a little extra. It’ll have a higher benchmark. It averaged 88 frames per second in the Tomb Raider benchmark and scored higher in Cinebench. What’s the deal? There’s a lot more fan noise now.